WHY ARE SO MANY AFRICAN AMERICAN WOMEN SUFFERING WITH FIBROID TUMORS 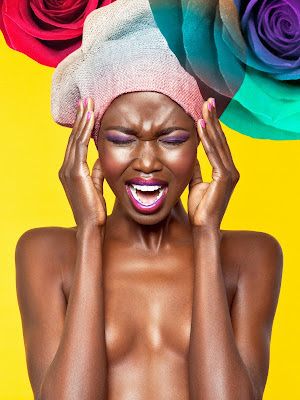 WHY ARE SO MANY AFRICAN AMERICAN WOMEN
SUFFERING WITH FIBROID TUMORS
by Dr. Jawanza Kunjufu

It is estimated that 40 percent of African American women, before menopause, suffer with fibroid tumors. This in contrast to less than 20 percent for White women. Why the 100 percent differential? Is it genetics? Do African women on the continent also suffer disproportionately? The answer is no. I believe that the problem and the solution lie in the African American lifestyle.

African American women are suffering with longer menstrual, heavy bleeding, bloating severely, and tremendous pain. Many of these fibroid tumors surpass the size of a grapefruit or a three-month-old fetus. Many women suffer for years under this torment.
Over time, fibroid tumors can lead to anemia. In addition, increased vaginal discharge and pain during sexual intercourse, discomfort during urination, constipation, backache, kidney obstruction, and can cause miscarriages.

Gynecologists will typically recommend either a myomectomy or a hysterectomy. Most doctors prefer the latter because it is easier for them to remove the entire uterus. The former, they say, requires too much work and is laborious, as they remove each individual tumor (which could be hundreds). Many doctors value their time over your body parts and ultimately hormone imbalances. The United States lead the world in performing hysterectomies. There are more than 550,000 performed annually, yet only 10 percent are performed for cancer. One-third of American women by the age of 60 have had a hysterectomy. African American women are 25 percent more likely to have this surgery than White women.

Unfortunately, many African American women never find out the root cause of their problem. They simply adhere to being rushed into surgery because the problem has become life threatening. What caused the tumors? Why is it disproportionally among African Americans? The answer lies in their diet. In my book, Satan, I am Taking Back My Health, I illustrate that the problem began with infant girls being fed cow’s milk rather than breast milk. God designed every mother with the milk for her child. Milk is not the same. Cow’s milk accelerate growth in humans. This explains why girls are starting their menstrual cycles as early as eight years old! More important, milk and other dairy products have an excessive amount of casein. This ingredient is used to make glue. If you rub the fibroid tumors, they are almost as hard as rocks.

I wonder how many African American women, tired from work and raising children, oftentimes alone, "treat" themselves in the evening with a bowl of ice cream, or a glass of warm milk with cookies, or a nice plate of cheese nachos. In America, cheese is placed in almost everything. Are ice cream, milk, cheese, and other dairy products really worth the accelerated deterioration of the women’s womb, resulting in radical surgeries? Do you love ice cream and cheese more than your uterus?

For many African American women, they were never given this information, therefore they cannot be faulted. For others, they knew, but lacked the discipline to alter their diet. For even others, they knew, but hoped there would be some drug they could take with their ice cream and cheese to alleviate the symptoms.

The solution to this problem is not simply the elimination of milk, ice cream, and cheese. This will help not to exercerbate the problem further. The major objective is to shrink and eliminate the tumors, not remove the uterus. This will require more time and commitment. Remember these tumors are a result of decades of abuse: consuming fried food, meat and foods filled with harmful chemicals. Ridding of the fibroid will require detoxifying the body including a liver and kidney flush. The Bible says "this kind requires prayer and fasting."

Toxic waste can also be removed with aerobic exercise (which creates sweating). Casual walks do not produce the heat necessary to eliminate waste much less stimulate the heart. Do White women exercise more than African American women? Do they weigh less? Research says yes.
CONTINUE READING...