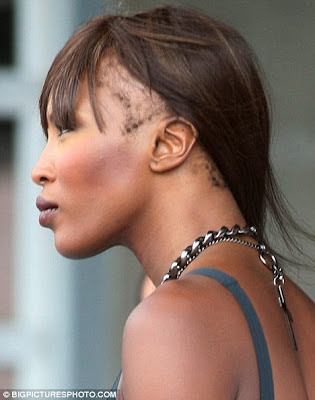 A new study from The Cleveland Clinic points out some of the cultural differences tied to hair loss.Balding in black women is being tied to the weaves and braiding they use for their hair.
Reuters released the details of the study and it appears to have some valid points. Nothing is conclusive as of yet, but it looks promising.  Here are the detaills being released:

While the findings can’t prove hair grooming is at the root of the problem, women might still want to take them into consideration, said Dr. Angela Kyei, who worked on the study.
“I won’t tell you not to braid your hair, but I don’t want you to braid it so tightly that you need to take pain medication,” said Kyei, of the Cleveland Clinic in Ohio.
Prolonged pulling at the hair strands may cause inflammation of the hair follicle, which has been shown to lead to scarring. In principle, that could lead to a type of balding that dermatologists call central centrifugal cicatricial alopecia, or scarring hair loss.
This type of balding starts at the top of the scalp and then spreads slowly to the rest. It occurs only in black women. Because there is no treatment for it, Kyei decided to try to find out what is causing it instead.
Observations from the 1960s had hinted it was related to hot-comb straightening, but little research has looked at other explanations.
The new study, published in the Archives of Dermatology, is based on health questionnaires and scalp examinations of 326 African American women.
Nearly all of them straightened their curls chemically and about one in six had scarring hair loss. More than half the women with this condition said they had braids, weaves or hair extensions, as compared to only a third of those with less severe hair loss.
“This is just telling us there is a trend and we need to study it further,” said Kyei, adding that it doesn’t mean these hair styles are necessarily tied to balding, which could have other causes.
In fact, the researchers also found women with type 2 diabetes were more likely to have scarring hair loss, as were those with bacterial scalp infections.
“If there is any take-home message from this study, it is that hair grooming is not the only thing you should look at in these patients,” Kyei noted. “If you have hair loss – specifically if you have the central type of hair loss, which is permanent — you need to seek medical attention.”
Procter and Gamble donated shampoo samples for the study, which were given to the women as a reward for participating.

What are your thoughts on the issue? Do you think weaves and braids could be the cause of balding in black women?
source
Posted by GUMBOHAIR.COM at Thursday, August 09, 2012