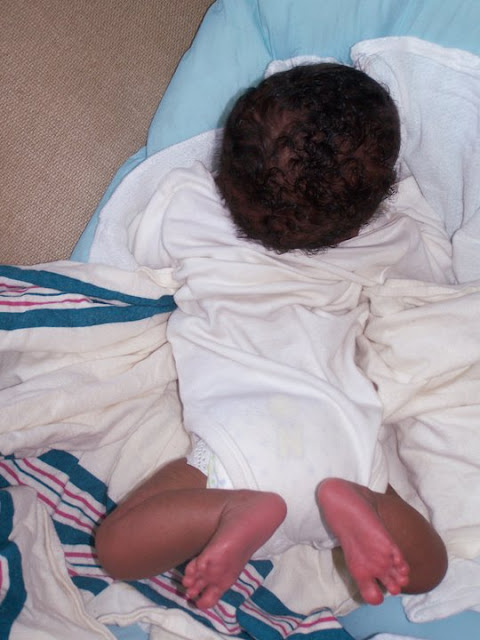 My grandfather often told me stories of the midwives who delivered all of the town's babies during his day. He spoke of them with  an admiration and amazement of how they would walk from house to house delivering the town's babies without fail. Later on when I became pregnant I knew that I wanted to have a midwife! However, I quickly found out that it wasn't as common to today as it is was then. I begin to search google to see what was available in my area. I originally wanted to deliver at my house but only one midwife was doing home deliveries in my area. To my dismay, she was booked for a solid 8 months so I was out of luck for a home delivery. She told me about the midwives at Touro's hospital in New Orleans. She said that at least I could have the best of both worlds by delivering with the women to women midwifery in a Touro hospital.

During the 9 months, I had the best possible treatment a woman could ask for while preparing to give birth. They would spend quality time at each visit making sure to answer every question that my husband and I had. I highly recommend these ladies if you are interested in that route and are near the New Orleans area.

A few days after I begin my 37 week mark, I awoke to some slight contractions in my pelvic area.
It started out as small cramps nothing major. I quickly called the midwives and was told to keep them informed as my contractions happen closer together. About 10 hours later the contraction started to increase like crazy, I could barely walk. I told my husband I thought it was time. I called the midwife but she didn't seem convinced I was ready but told me to come in anyway.

As I was getting out of the car at the hospital it was like a scene from a Bill Cosby comedy skit because I was squeezing my husband hand like crazy. A hospital worker who was getting off of work ask me what was wrong and could he help. Then one of his co workers said can't you tell she is in labor you can't help her. He immediately got me a wheelchair and I was brought to the birthing room. To my dismay I was only 2-3 centimeters. They monitored the baby's heartbeat and then sent me home. Since I was doing a natural water birth, I had to go back home until I was closer to 8-10 centimeters.

Well, I came home and to his credit my husband did everything he could to keep me comfortable. As he comforted me, I did my best to stay strong. After 10 more hours, the contractions were coming about every 2-3 minutes. My husband gave me some kale juice which helped some but I was starting to feel really nauseated. He put a bucket in front of me but next thing I know, I stood up and my mucous plug came out. My husband immediately googled it and said we must be close. Next thing I know, I threw up every where except for the bucket!!! My poor long suffering husband lovingly grabbed a towel and cleaned it up. I learned later that he couldn't believed that I would bypass that bucket and go straight for the floor. LOL!

All of a sudden, I had an intense desire to take off all of my clothes! I thought it would help some kind of way. I then wanted to go out side. My husband put a gown on me and some flip flops. I then informed him that I was ready to deliver. He doubted it but got my stuff and we head to the hospital. As we headed to Touro hospital I cursed the bad streets in New Orleans. After a couple of miles of bumpy roads and pot holes, I yelled to my husband to pull the car over. I then put my head out of the car and started beating the top of it! Nobody seemed to notice but if anyone saw me, I'm sure they thought I was a crazy woman!!! My husband waited for my tantrum to end and then preceded to the hospital. When we finally got there it was about 3 a.m. and we couldn't figure out which side to park on. I started to think "if this man don't find somewhere to park it's gonna be a misunderstanding in this car".  I was thinking, "make a decision man!". Finally, he parked but there was about 5 steps I had to step down before we could cross the street and enter into the hospital. I immediately told my husband that I wouldn't make it. He told me I had to suck it up because there was no other option.

I realized he was right and started going down the steps. We eventually got to the birthing area. A nurse announced that I was the one having the natural birth. Several nurses came form behind the desk to see who was this brave half crazy person. They acted as if I was a dinosaur, and could not believe that I was going to do it natural. Then a nurse told me that she would be assisting the midwife and started asking me a bunch of questions before she would let me enter my room. Even though I know she was doing her job, I was furious! Consequently, in the middle of her asking me questions, I stood up from the wheel chair and preceded to start walking to the birthing tub. She then said that she could ask the questions later.

When we reached the room, she checked to see how many centimeters I was at the time. To her (not mine) shock I was 10 centimeters. As she started running the water for the tub, the midwife came through the door. I got in the water and it's almost as if my body started releasing endorphins because I started feeling a lot better. Then it's like my body said," you ready? let's go!" At this point the contractions started up again at full force. I must admit, I think the water helped relax me because even though it was intense I felt better than when I was at home. Now when they tell you they assist you in birthing they mean that thing lol!

As my contractions increased, I started to not think about the contractions but started thinking that there was no way in the world this big baby was coming through me. I said, "I can't do this." But my midwife and husband told me that I was already doing it! The midwife then pressed against my pelvis and showed me how much room I had for the baby to pass. This gave me the courage I needed to push on. Within minutes, my water broke! It was like a torpedo shot across the water.

Finally, about 20 minutes later our son was born. He was a healthy 7 lbs 1 oz. I  was overcome with emotions. My love for him was immediate and intense! It's almost like the 24 hours of labor didn't even happen. I'm so thankful that God granted me the strength and endurance to be able to have a natural child birth. I hope this encourages someone...be blessed!!!

ALL CONTENT COPYRIGHT GUMBOHAIR 2011 - 2012 UNLESS OTHER WISE NOTED. CONTENT MAY NOT BE USED FOR COMMERCIAL OR PERSONAL PURPOSES WITHOUT PRIOR WRITTEN CONSENT. ALL IMAGES TAKEN BY GUMBOHAIR  ARE COPYRIGHT PROTECTED. ALL RIGHTS RESERVED.